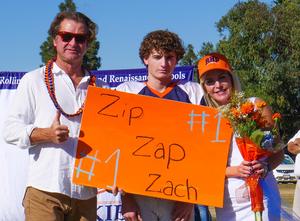 "In reality, The Hill of Death is nothing more than a steep road that had a terrible pavement job. But as a kid it seemed like an insurmountable task that I needed to complete. And in a way I did."

I’m thinking that people need a laugh right now. So, I’m going to tell a story about how a wagon almost killed me, my mom, and my brother.

Among the rolling hills of the Palos Verdes Peninsula stands a vindictive and bloodthirsty ascent coined The Hill of Death. This hill earned its name by being the cause of several very painful scrapes. I had the pleasure of living next to the hill for the majority of my childhood. The hill was notorious in my neighborhood. Everyone who lived by it knew of it and the injuries it had caused. However, residents only became truly aware of this hill the day my friend decided to ride down the hill on a scooter. As he walked up the steep ascent, my friends and I cheered him on. When he finally reached the top, we excessively started chanting his name. Just for him to make it only a quarter of the way down. The scooter flipped forward and he flew over the handlebars. The fall broke his arm. After the word spread about the accident, the moms of houses nearby panicked and told their kids to stay away from the newly-named Hill of Death.

I didn’t care and I wanted to outlast my friend, so I decided to take a ride down it anyway. It was time for me to begin my long walk up. I began feeling nervous that I, too, would break my arm. When I finally reached the top, my friends started chanting my name. I pushed off and the scooter started rolling forward. It got fast, and before I knew it, I was halfway down the hill. Even though I had little control of the scooter, I felt confident that I would conquer the hill. Unfortunately, the confidence soon turned into pain after my scooter hit a loose piece of pavement. I was lucky, I managed to survive the hill with only a few scrapes.

Later, after hours of thinking, I came up with a genius idea- I would be better off using a wagon. We owned an old but reliable red wagon, and I firmly believed that this fine piece of American ingenuity would get me safely down that hill. I was so certain of my plan that I convinced my younger brother to join in on my impending death. We were able to take the wagon without our parents noticing. After the long walk up the deadly hill, my brother spotted my mom’s car.

He gently let me know by saying, “OH CRAP MOM IS HERE!”

In a quick thoughtless moment, I jumped in the wagon and told my brother, “Hurry, jump in before she catches us.”

The wagon rocked back and forth as it started to trudge down the rough slope. My brother and I had no control, and soon. the shaking caused the wagon to move off course.  We were now headed into a giant boulder on the side of the road. Suddenly, I saw my mom booking it up the hill with flip flops on. She ran so fast that her flip flops flew off her feet, but that did not deter her. She managed to catch us, steer the wagon back on course and jump in the wagon before my brother and I met our ends by a giant boulder. Of course the wagon still crashed, but it wasn’t until we reached the bottom. My genius plan had worked. I conquered the hill.

I never returned to the hill after the wagon crash, but it still stands there today and will be there for years to come. In reality, The Hill of Death is nothing more than a steep road that had a terrible pavement job. But as a kid it seemed like an insurmountable task that I needed to complete. And in a way I did.