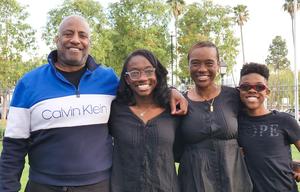 "After this speech, you probably think I’m obsessed with athletics (which is true) but one thing I learned was that it wasn’t just the sport itself that affected me, it was the aspect of a team or having a purpose. So whether that be a sports team, a choir, or a service-learning group, I encourage each person to invest some part of their time into an extracurricular because you never know the people or learning you'll gain from the experience."

My life has and probably always will be surrounded and controlled by sports. Ever since I was able to walk, I’ve tried to run. My dad simply said it one time “ Kai, you are just a competitor.” I’m grateful for my parents allowing me to try different sports and giving me the chance to be the best athlete I could be. As my senior year comes to an end, so does my adolescent career with these sports. To close out this chapter in my life, I’ve decided to write letters to three of the sports I’ve played, starting off with the most recent, basketball.
Dear basketball,
Words can’t describe the mixture of emotions I probably feel right now talking about you. Never in my life in any sport I’ve played have I felt like the weakest link until this sport. You seemed like my worst enemy when I joined the team freshmen year, Since I was behind all the other girls in skills, knowledge, and the ability to make a left-handed lay-up. It definitely struck my confidence down a bit with all of the dreaded seventeens and the dozens of plays I was supposed to know but couldn’t get. I honestly disliked the sport so much that even after winning CIF and going to the State Championship, I still decided not to return for the next two years. Yet senior year comes around and I see myself wanting to just play for old time’s sake. Why did I want to put myself through that again? Because I liked to win and I needed the conditioning. But I gained something better out of the sport this year- a crazy friendship between all the girls on the team and a season’s worth of laughs and adventures that can never be recreated, like our five-hour van ride to central California or our trek through Manhattan. I gained an appreciation for a sport I once hated but now seemed to enjoy playing and watching, and it is unexpected yet heartwarming. So thank you basketball for the laughs, the tears, the injuries, and most importantly, the pizza party.
Dear Track and Field,
I will always say you are my favorite sport because it was the only sport where I have never been behind or trying to catch up with the rest. I was actually ahead of the pack for once. Thanks for the six Junior Olympic medals, 25 regional championships, and 132 other medals from various meets. The blood, sweat, tears, and time put into you were well worth it. The numerous birthday parties and summer vacations I missed during my childhood seems like it would have ruined my socialization skills. But waiting at the high jump pit and talking to all the other jumpers seemed to make up for it. You taught me to be versatile and have perseverance in the heptathlon, where young girls push their bodies to their limits as they compete 100 meters hurdles, high jump, shot put, long jump, and 800 meters all in one day. It is something only a select few can handle. You also taught me that you can never be perfect. There is no limit in track. There is always another record to be broken again and again. And there is no maximum time, jump or throw you can reach. So thank you track for shaping my work ethic for the better. And I hopefully will be back in the pit next year running and jumping for a different team.
Finally, Volleyball.
Dear Volleyball,
I’m so grateful for all the opportunities you have given me. Playing all across the country against the most elite teams has definitely been a blessing, and so has the opportunity to play internationally, as well. Club volleyball has taught me the value of time and not to waste it, if possible. Thank you for also allowing me to be able to play for Mizuno Long Beach. I love the club so much and after four years, it feels like I live at the gym sometimes. But because of Mizuno, I was able to be placed on a team that allowed me to get exposure for college recruiting but also allow me to have some of the craziest adventures with my teammates. Without you, I would have never been able to meet my closest friends who have pushed me to be a better volleyball player but also a better friend. And without you, I would probably not have looked into West Point, let alone go there. So thank you volleyball for helping me onto a path of success. I look forward to my last four years playing in college.
After this speech, you probably think I’m obsessed with athletics (which is true) but one thing I learned was that it wasn’t just the sport itself that affected me, it was the aspect of a team or having a purpose. So whether that be a sports team, a choir, or a service-learning group, I encourage each person to invest some part of their time into an extracurricular because you never know the people or learning you'll gain from the experience.