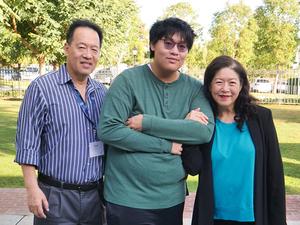 Challenge the ideas that you’ve been taught in school. Ask why you should believe something, or ask why things have to be the way they are. We are all just clumps of stardust, united under the abstract definition of “life.” But we are the most self-aware clumps of stardust that may ever exist.

The other night, after coming home from class, I saw a green ant out of the corner of my eye. It had the exact same color as that questionable green sauce you can get with your chips at a Mexican restaurant. I mindlessly walked past it, my stride hundreds of times larger than its slow crawl. Within seconds, its outline faded towards the blind spot of my vision.

On the way home, I couldn’t help but think more about that little ant. Perhaps after I left, it would go on to live its life to the fullest and have offspring that would one day rule the Earth. Perhaps instead, it’d be immediately squashed, reduced to a sad blotch of salsa verde on these long cement floors. I would never know, nor would I ever see that ant again.

To me, it existed as only a green speck in a short moment in the vast library of memories I’ve stored. It was a tiny blip encircled by a world of life around it.

As I got on the freeway, I had a look around. I was surrounded by red and yellow lights, stuck in a rush-hour freeway clog. Cars were piled up in orderly lines alongside one another, organized like a line of ants marching together. From afar, we were just specks of color moving slowly across the crowded Earth.

I took a glance around at the tangible evidence of humanity’s great aptitude around me. From the cars to the roads to the skyscrapers around me, it’s impossible not to see humanity’s strengths. We’re supreme thinkers, global communicators, and society builders. We understand the universe in a way that ants never could. An ant is simply incapable of the mental mind work that we as humans all share. Put an ant in front of a mirror, and it’s incapable of recognizing itself. Its mind lacks the framework to recognize language, store ideas, and visualize like we can. It’s just a simple animal.

But no matter how smart we are, we’re still animals too. We’re limited by the constraints of our still primal minds. There are animals out there who can see a range of the electromagnetic spectrum that’s far larger than ours. That means they see colors that don’t exist to us. Take a moment to try and picture a color that doesn’t exist to you. You can’t. Our mind is never an objective observer, because true objectivity is impossible. We make sense of things by relating them to the ideas and truths we’ve ingrained within ourselves.

It’s so uniquely human to assume things must have some “meaning.” We want to understand our “purpose” in life because we’re trying to force something ridiculously complex into a mental analogy we can understand. We draw distinctions between good and evil, order and chaos, right and wrong, because we’re trying to make sense of a world that makes no sense. Our mental constructions of morality, spirituality, and meaning have no “objective” truth within them. We made them because we’re just monkeys who want a purpose.

Perhaps on the other hand, science is a discipline meant to seek out those “objective truths” that bind the world around us. But the greatest hindrance to science is the human condition itself. When Einstein proposed that time was not a constant, but rather intrinsically linked to speed and position, he overturned years of faulty science before him. Maybe to some objective, all-powerful being that would’ve been obvious - but to us humans, it requires us to overturn everything we thought we knew.

For all we know, we might all be ants staring at our own reflection. Maybe the secrets of the universe are staring us right in the face. We, as humans, may be the only species with even a grasp on just how much we don’t know.

Challenge the ideas that you’ve been taught in school. Ask why you should believe something, or ask why things have to be the way they are. We are all just clumps of stardust, united under the abstract definition of “life.” But we are the most self-aware clumps of stardust that may ever exist. Thank you.