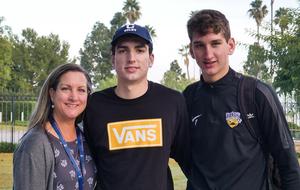 No matter how down in the dumps you may be, a positive attitude can make the situation seem even better. On top of attitude, the people you surround yourself with will influence how you deal with hardship. I was lucky enough to have people around me that knew how to cheer me up in times of need, and for that I’ll forever be grateful.

The past four years of my life have both been the most challenging and enjoyable four years of my life. I know it’s a cliche, but anyone who knows me is aware that it couldn’t be more appropriate. When I came to RHP my freshman year, I knew absolutely nobody at the school. In both an attempt to make friends and actual interest, I joined the football team. During the summer workouts, I met the only other freshmen on the team, Elijah and Chavez. None of us really came to the school tightly knit with anybody, so I think we were kind of all in the same boat without really saying it. As my dad drove me to the first summer workout, my stomach began to ache. I was 145 pounds soaking wet and expected to be the weakest guy there by far. I pictured high school football, even at a school like this, to be somewhat similar to Friday Night Lights. All these big dudes that could lift cars and knockout running backs with a single hit. Boy, was I wrong. I thought my dad pulled up to the wrong address as we parked in front of what looked like an abandoned house. Surely enough, I could see people inside, so I nervously started up the driveway. As I started talking to the players I could tell they were guys like me. They weren’t these super-intense beasts that only cared about hitting people, they were skinny dudes like me that wouldn’t have gotten a chance to stand out at a bigger school.

Freshman year, I was dumbfounded watching Sang Min Wang catch the game-winning touchdown against Cate in playoffs from the bench. During my senior season, I was actually on the field as we sealed the win in our final football game of our seniors’ high school careers. It hasn’t all been about football either. I’ve made friendships that will hopefully last into the future, and I wouldn’t trade some of the memories for anything. Whether the memories are seemingly insignificant, like Chavez and I winning Mr. Williamson’s in-class game by one cent, or bigger memories, like getting accepted into a college, I’ll cherish them all for years to come.

Now don’t get me wrong, it hasn’t all been happy memories. However, through the roadblocks and situations, I feel I’ve learned some of the most valuable lessons to carry with me. First, your attitude can completely determine the impact of any challenge. We all face hardships that may or may not be our own fault, but there’s no use in continuing to dwell on the past. The key is learning from the hardships you experience, and using them to better yourself. No matter how down in the dumps you may be, a positive attitude can make the situation seem even better. On top of attitude, the people you surround yourself with will influence how you deal with hardship. I was lucky enough to have people around me that knew how to cheer me up in times of need, and for that, I’ll forever be grateful.

Lastly, don’t take yourself or life too seriously. Every once in awhile we all have to stop and smell the roses, it’s just about finding the balance between fun and responsibility. As Ferris Bueller once said, “life moves pretty fast. If you don't stop and look around once in a while, you could miss it.”