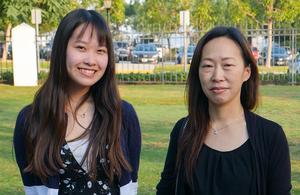 There is always a lesson hidden behind decisions, good or bad. It just takes a little more examining to do. I could have chosen to keep looking at my decisions negatively. I could have wallowed in my pool of regret and stopped endeavoring. But in the face of the decision of how to see life, I intentionally viewed them in a more positive light.

I have had many regrets in my life. I always used to wonder how my life would have been if I made different decisions. When I was in elementary school, I lived in Japan like any other ordinary Japanese kid. The difference was that I knew the environment wasn’t for me. Emphasizing only academic achievements, the Japanese curriculum forced me to go to cram school daily after school for five additional study hours; the pressure to go beyond my current grade level and be admitted to an elite private school was an excruciating burden. Knowing that I was not in an environment where I could excel, I made a pivotal decision to study in the UK. At 11 years old, my impulse was telling me that I needed to get out of Japan and go to a Western society where different ideas were more accepted.

Once I got to Britain, however, I felt isolated. I was the only Japanese student in the entire school and I had only learned English for four months at the time. Having a hard time expressing myself in a strange country, I had to go out of my way to make my voice heard despite the language barrier. I went abroad where different opinions are more accepted, but I wished there was someone who could represent my voice.

This was when I fell into the spiral of “what if”s. Although I made decisions I thought were right for me at the time, I often wondered what my life would have been like if things were a little bit different. In Japan, I wished I had started going to cram school at a younger age. When I got to Britain, I wished I started studying English earlier. As I struggled to fit into a new society, I wondered what would have happened if I just held on for a little bit more and went to middle school in Japan.

But when I moved to America, I was determined to change my attitude. I was no longer going to hang out to the past parallel worlds I had imagined in my head. I decided to work as hard as I could to not regret anything in the future. I worked hard in school to be the best student I could be; despite my language barrier and the lack of cultural resources, I worked hard to acculturate into my new home. The result quickly showed in my grades. At the same time, I started studying Japanese again to not lose my Japanese identity. Because I regretted not continuing tennis, I picked up my now-favorite extracurricular sport, martial arts. I made intentional choices so as to not have regrets in the future.

Now, I am happy with who I am and what I have done in high school. I don’t regret going to Britain anymore either. I know it made me stronger as a person and my English improved greatly. I couldn’t have been as independent if I had decided not to go.

Through many monumental decisions I’ve made and through living through those decisions, I have learned that, despite being careful, there might be decisions that may seem regrettable. But I believe that even if the decision feels wrong at first, working through it can produce an invaluable aspect of my life. There is always a lesson hidden behind decisions, good or bad. It just takes a little more examining to do. I could have chosen to keep looking at my decisions negatively. I could have wallowed in my pool of regret and stopped endeavoring. But in the face of the decision of how to see life, I intentionally viewed them in a more positive light. You alone can decide how to look at your own life: either positively or negatively. How you narrate your story ultimately decide how those events affect you. With this lesson in mind, I will keep moving forward, making intentional decisions and perceiving them as positive opportunities for growth.