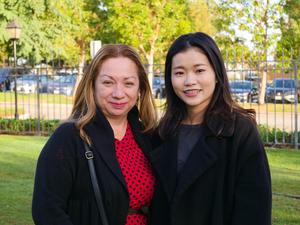 Even though I stopped dancing years ago. Having a positive attitude is one of the most important things that I learned from dancing. Life is like a journey. You have to face lots of obstacles during this journey. The attitude you choose to face those obstacles is very important.

We arrived at the ceremony hall in the early morning. After the rehearsal, everyone was nervous and anxious except for Carol. Carol seemed excited, and she was telling funny jokes to everyone because she recognized the nervous feeling shown on our faces. I was surprised by her positive attitude. Wasn’t she nervous? I wondered.

It was our turn to compete. We hid our nervousness and walked towards the stage confidently. The lights on the stage turned bright and the music was on. Our feet tapped to the steady beat. We smiled with confidence and believed that we could win the competition. At the end, we bowed ninety degrees, and walked off the stage with our backs straight. Our hearts were filled with joy.

Backstage, we screamed in celebration of our accomplishment. We were running and jumping around. Suddenly, I heard a loud bang. It sounded like a heavy rock had dropped on the ground. I turned around and saw Carol lying on the ground. We were laughing because we thought she was aiming to make us laugh again.

“You don’t need to celebrate like that!” I said amusedly.

However, she did not answer me immediately. She just stayed in that position. I ran to her and checked on her. I shook her shoulders and yelled her name. She raised her head, smiled at me, and told me that she was still alive. I supported her as she tried to stand up, but she could not walk at all. I let her sit back down first and called our dance teacher. I asked her if Carol needed to go to the hospital. I could not understand why Carol was not willing to go, was she afraid to see the doctors?

Eventually, my teacher, Carol, and I stayed in the hospital for the whole afternoon. I looked around, everyone was waiting for the report. That was the first time I realized Carol was actually afraid of things, too. After a while, the result came out: Carol had a comminuted fracture of the knee. I expected her to cry, but she did not. She said that she did not want us to worry about her because nothing could stop her from dancing, making friends with us, and enjoying life even though her knee is badly injured. Carol was not able to dance for several years after the injury, but she always watch us practice and give us support. Her positive attitude influenced me.