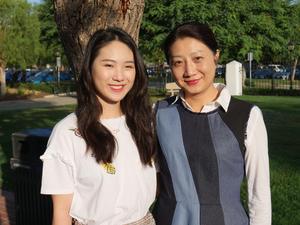 To me, life is like a sine graph, it goes up and down and up and down again, but the range is always from -1 to 1. Life may not ever exceed 1, but trust me, it won’t go below negative one either! Everything will be okay in the end.

It’s okay. We say it to each other and to ourselves. Everytime my friends complain about how stressed they are, I tell them it’s okay. However, I understand the feeling of not being okay. Even though other people look at it and think it is not a problem at all, you, as the person in the center of your own universe, think you world is collapsing.

When I first came to the U.S., I did not understand anything in class, I wanted to go back to China and give up on myself. When I lost a national taekwondo championship by one point, I cried and cried. When I had to hike in pouring rain at Yosemite, I felt hopeless. When I argued with my parents about tedious things in life, I just wanted to leave the house and never come back. When I had a B- towards the end of a trimester, I had nightmares about that being my final grade. Sometimes it’s academic struggles, sometimes it’s just life in general and sometimes it’s both. If someone says “it’s okay”  at the moment you are struggling, we don’t take it seriously. Instead, you probably want to throw a punch at that person because it is not okay at that moment. However, the truth is that things will turn out to be okay in the end.

If you don’t believe that, here is some evidence. I didn’t understand much English five years ago, but now I am standing up here and giving a speech. I lost the taekwondo championship that year, but I attended the same championship the following year and won. We suffered at Yosemite but we got back early one day and that experience became our valuable memory. After my argument with my parents, we still sat down at the same table and had dinner together. I freaked out about my B- at the time but I still ended up with an A for that trimester. See, things turned to be okay.

Although we understand that, in the end, results will be okay, we still struggle during the process. Life might still be painful and hard to get through, but now let me say “it’s okay” one more time. Keep in mind that it’s also totally okay to NOT  be okay. When the sun rises again, things will be better. Try your best to change and improve the situation. Don’t be passive, be active. Good things might arrive late, but they will arrive.

If you have never experienced the bad, then you will never appreciate the good. So, it’s okay to struggle, just remember that it will be okay in the end. If you want to love, then love. It’s your life so enjoy every minute! As long as you are happy about it, go for it. To me, life is like a sine graph, it goes up and down and up and down again, but the range is always from -1 to 1. Life may not ever exceed 1, but trust me, it won’t go below negative 1 either!  Everything will be okay in the end.