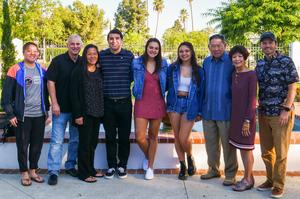 I understood that now. Stay true to yourself and keep pushing. Learn to bounce back and not let anyone keep you from doing what you want and achieving your goals. I learned that it's not the falling down, it's the getting up that matters.

I have to be honest. These four years of high school have been very challenging. Coming from a large public school, I would sometimes question whether I made the right decision to attend such a small highschool. But my coach always said, “Keep your eye on the prize.” It was such a simple phrase, but one whose power I would later learn. No matter what I was dealing with or what my complaints were, other than that phrase, he didn’t have much to say. And of course, that angered me. I felt as if he didn’t understand the adversity I was facing nor did he think it was a big deal. But when you’re sixteen years old, every challenge regardless of how small seems impossible to conquer. And what did that mean anyway? Keep your eye on the prize.  However, I always listened and took what he said to heart, as there was usually a lesson in his words and maybe a lesson would come from these words too.

At one point though,  I thought I had hit my breaking point. But That phrase wasn’t enough, and was the last thing I wanted to hear. But this was also when I finally realized the value of that phrase held.

After a certain set of difficult experiences,. I found that I just wasn’t happy anymore, and I needed change. I wanted to get out, and go somewhere new. I was ready to start over. But once again I felt I owed it to my coach to have a conversation with him. I was expecting this conversation to be like all the others, always ending in the same way. However, this interaction was different. The one time I wasn’t expecting advice is the one time he gave it to me. However, it didn’t sit well. I had talked about leaving school before, but he had never encouraged me to follow through with it until now. It was his encouragement that made me realize that this was exactly what I didn’t want. I didn’t want to leave. I always knew in my heart staying here was best for me, but at the time, I was blinded and I let other people dictate what my future would be. It was at that moment when I realized that other people don’t define who you are.

Running away doesn’t fix anything. Throughout your life, wherever you go, there will always be adversity. And the grass isn’t always greener on the other side. It's always easier to quit than to keep fighting. In fact, the more you quit, the easier it becomes. And then it hit me, the best thing you can do for yourself is to “keep your eye on the prize.” I understood that now. Stay true to yourself and keep pushing. Learn to bounce back and not let anyone keep you from doing what you want and achieving your goals.

I learned that it's not the falling down, it's the getting up that matters.

You can't please everyone. Nothing you do will ever be enough, so please yourself. What other people think shouldn't matter. Become so confident In who you are that no ones opinion, rejection, or behavior can rock you. Other people do not define who you are. It’s your life, not theirs. And in the famous words of Dr. Seuss , "Be who you are and say what you feel because those who mind don't matter and those who matter don't mind."