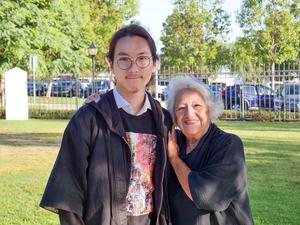 " It is a good thing that people realize the importance of copyrights. However, at the same time, copyrights also limit the rights of translation, which lowers the quality of translation, since the official translators do not understand the native culture in that country. Also, the difficulty of getting copyrights makes the available authorized works very limited."

Manga is used to be defined as the comics in Japan, published in magazines, but, now, this becomes a kind of artistic style giving an abstraction to human figure to emphasize their characteristics and aesthetics. Well, think about Iron Man in a more simplified and personalized style.

Unlike anime, manga is very flexible. Instead of just twenty minutes per episode, people can spend much shorter or longer time to enjoy. It also keeps the author’s unique, individual and unduplicatable art style. Different from a graphic novel, manga is simple but deep. It focuses on the pictures, instead of words. People can feel the plot and emotions through the frames. I read them frequently: when I wake up and pick up my phone, when I wait for someone, and when I want to procrastinate. They have been a part of my life since I was nine when my mom took me to get a flu shot and bought me a manga magazine to keep me quiet.

I always use an app on my phone to read manga. About six months ago, many fantastic works disappeared. It said “ This manga has not been licensed”. It was not surprised. I realized a few years ago that this app did not own any copyright for its works. Thanks to that, people can freely publish translated work, no matter where they get the source.

It is a good thing that people realize the importance of copyrights. However, at the same time, copyrights also limit the rights of translation, which lowers the quality of translation, since the official translators do not understand the native culture in that country. Also, the difficulty of getting copyrights makes the available authorized works very limited.

In America, where manga is not so popular, there is almost no legal way to read them. Then here comes an ethical question: Should we read works without copyrights or not. As manga has already been a big part of my life, the second one is not an option. In this case, manga fans are forced to support unauthorized work. We have no choice.

Everyday, I was worried that maybe in the next second, everything in my collection will disappear. I have tried everything to store them in my memory, but there are thousands of them. I scrolled down my collection, and only found vestige. There were used to be more, but I could hardly remember their names. I felt like my past had been erased. An unspeakable grief filled my heart and there is nothing I can do, expect complain on Reddit.

Finally, I find the best way of solving this, (not solve, but provide a subtle remedy) is to be more independent from the internet. I have begun to buy manga books physically. In this way, no one can delete them from my bookshelf. Although they are not cheap, I finally have a chance to support those authors. Still, I also read online, but the physical books make me feel a lot safer. I can touch them, feeling the weight of what I have been doing in the past 10 years.Why am I paying 20 bucks to buy just one single book? Not just security, but more importantly, the weight. That less than 1 pound weight. Sorry, Mr. Brammah. 4 Newtons. Wrong unit.

Being independent from the internet is not being isolated, but reducing the reliance. I still spend money to buy digital manga online to read the latest updates as soon as possible. The Internet does have its own irreplaceable advantages: convenience, but it is not everything.

From copyrights to digital ownership, the best solution is physical possession, in order to have the safest privacy. In this explosion of mass media and big data, all we can do is keep the connections to where we truly live. No offense to Khan Academy, but that’s why we all go to Rolling Hills Prep and Renaissance instead of doing lonely and isolated online lessons.