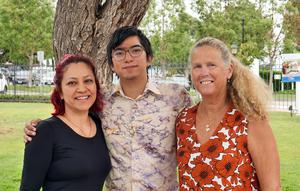 My art is everything. Through photography, I can capture moments in time and share them with others. I really don’t spend a lot of time worrying about what others think. I realize that I see life most clearly through the lens of a camera and I’m happiest with a camera in my hand. And that is important. Someone recently told me “don’t let anyone get in between you and your art.” That is very wise advice indeed.

I had just graduated from middle school. I am a Freshman- 14 years old. I’m going to a new high school. I’m a stranger, an outcast. I have no friends. I’m emo. I dress in black. I have no sense of direction to where my life is going. I take art to keep my mind busy. I hated my art class. Switched classes. I joined Photo One class. I start failing immediately. I don’t give up just yet… and continue in the class. I ignore my teacher's advice on dropping the class. In the final trimester, I earn an A-. I then join the class again next year. I’m in Photo Two now. I become a top student. I have found my passion in life.

That pretty much sums up the first two years my freshman year of high school.

In Photo One, like any other student who is new to the school, I was scared of the teacher, Ms. Kandel-Scott. Having heard of her through my friend who took her design class, I knew enough to be nervous. My friend’s take on Ms. K was that of horror and tales of relentless brutality if you didn’t do something right. This was quickly debunked. There I was as a beginner in Photo One; my skills were beyond terrible at that point because I had never held a camera with the intention of shooting a photo in my life. Along with my bad habit of turning things in  “kinda” late, I didn’t think Ms. K liked me as a student. After all, I was pretty much not focused and failing the class.But I started getting my act together, working harder and in that moment of time, Photo was the class that mattered to me most. It still does.

By the end of my freshman year, I passed my photo class with an A-. This doesn’t sound that impressive, but when you take into account that I went from an F to an A-, it's really a miracle. I went on to take Photo Two. This class involved knowledge previously unknown to me: the 5 rules of framing, lines, angle, thirds, corners, and intersections. My photo ability went from an average point-and-shoot to an actual thoughtful photographer. With the five rules in the back of my mind, I made sure when taking a photo that what I was look at through my viewfinder was conforming to the five rules.  Basically, I went from being a beginner to having experience. Also, my relationship with Ms K improved because I was now motivated and started showing how much I loved the class. I was the only student to ask to go out and shoot in the rain. It was there where I felt that everything just looked better. In the rain, everything has a reflective surface which I think makes everything much more interesting. It's like everything has been coated in a thin layer of glass. Think of a spider’s web. Without the rain, you can faintly see the web, but you have to get in the right angle to see it. It’s the same in photography when you have to get the right angle for a good shot, but with the rain, the web is coated with water making it visible in all angles. Rain makes subjects in a photo pop out more than a normal photo would.  Outside in the rain, I wasn’t focused on the cold air and the soaked surroundings. I was entranced. The rain and its sounds are Mother Nature's music. I found the sounds were different depending on the surface in which the droplets landed. Then, all the sounds collided together like an orchestra of water play. It was after 30 minutes when the cold started cutting through my skin and into my bones, and the weight of my cloak was starting to be noticeable, that I realized how drenched and cold I was.

I returned to class, transferred my photos, and showed Ms. K what I shot outside in the rain. She looked at them and through the process of elimination selected the ones which stood out. I started with 36 images, quickly going down to 7, and then finally 3. Such is the way of selecting the “good” ones. I already saw this as normal, but you’d think it would be demoralizing to get basically 90% of your images put aside deemed not worthy enough to be chosen.  Although it’s hard, it prepares you for the criticism of the outside world because as an artist/photographer, you’re going to have to put yourself and your work which you deem “good” out there in the world. And, you never know if it will be chewed up or cherished. To this day, I am my harshest critic, but I appreciate Ms. K’s critiques because they are preparing me for the real world.

My art is everything.  Through photography, I can capture moments in time and share them with others. I really don’t spend a lot of time worrying about what others think. I realize that I see life most clearly through the lens of a camera and I’m happiest with a camera in my hand. And that is important. Someone recently told me “don’t let anyone get in between you and your art.” That is very wise advice indeed.