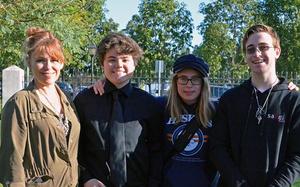 What I want to leave you with is this: Everyone, whether they suffer from mental illness or not, goes through low and dark emotional points throughout their life. No matter how much it may feel like it, you are not alone. You are not alone. And it can get better.

For those of you who didn’t recognize me without a guitar or a violin on steroids in front of me, Hi, my name's Chance. Today, I'm going to be talking about how I used to hate everyone, all the time. *Pause* Now, I know what you're thinking. “Chance, that's not something you say in a senior speech” or “Ohh boy, here we go again”, or even “whaaat, you hated me?”. But just bear with me, I do have a point.

It wasn't personal. By the second trimester of my junior year, I had delved down into a dark place in my mind. I was isolating myself at school and at home. Sure, I had friends. But they either went to other schools or, as far as my anxiety was concerned, had better, closer friends to talk to. I felt alone, far more alone than I had in a long time.

As result, I went into a rather interesting state of semi-existence. It was a bit like being a zombie; I wasn't really present, nothing seemed real, and I just sat and watched myself go through the motions without really having a say in what I was doing. My grades started to drop as I fell further behind on my homework. Sometimes I wanted to scream out, and I was often internally doing so. I couldn't seem to stop myself from not doing the work. I'd just fade out of existence, and then class was over, and wow, how did that happen?

The moments I was conscious enough to notice the world around me and the people in it, I often felt disdain, irritation, and pity towards them. Everyone seemed too immature, too insecure, too serious, or not serious enough. I couldn't stand people. People in general, not specifics, just all people.

That was awful. Hating everyone is awful. You can't genuinely enjoy a conversation, ever. Everything anyone does is stupid, pointless, or cruel. Life just dims down even further.

Towards the very end of the third trimester, I ended up going to a therapy group three days a week and not going to school at all - I was to finish school during the summer. At therapy, I met other teenagers going through anxiety, depression, and suicidal urges. The therapy itself was focused on what to do in the event of anxious feelings or an anxiety attack. Essentially, they were trying to teach us how to train our thoughts so that our thoughts didn't run away from us - which wasn't particularly helpful for me, as a lot of what we went over I had already known. Being able to communicate with others my age was refreshing. Commiserating over each other’s stories, swapping tricks to assist with dealing with our various mental illnesses, sharing songs and music that helped us through rough times of our life. The therapy group only went for a month, but we still talk to each other.

At the end of the summer, I went to India. With a friend, I took part in a course on how to become a better human, basically. Just little things, like how to deal with conflict with a calm mind, how to let go of the past, and how to live  in the moment instead of suffering over anxiety towards the future. While I was there, I was the most at home I had ever been. My class consisted of people from ages 18 to 30, and I was the exception at 17. Even so, I never felt out of place after the first day, and throughout the week I wasn’t as anxious as I had been before. It was quite blissful.

In India, I met over a hundred individuals from all over the world. In between lessons, I was able to have in-depth conversations about life and our different struggles and how we cope. There wasn’t any judgement. We listened and were listened to. We gave and were given advice and support. One of the monks who gave the course talked to me one on one about how I can still learn to love myself even with gender dysphoria, which was mind-opening.

Since my trip to India, I haven't returned to the low point I was back in junior year. I wouldn't say that I’ve completely overcome my anxiety or depression, as you can't really “get over” mental illness so to speak, but it isn't as bad as it could be.

Now, I did say I have a point. What I want to leave you with is this: Everyone, whether they suffer from mental illness or not, goes through low and dark emotional points throughout their life. No matter how much it may feel like it, you are not alone. You are not alone. And it can get better.