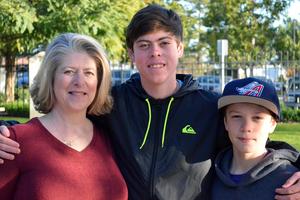 After the brutal 4 months, I was allowed to finally practice soccer. I was so excited to start playing soccer again. But as the days went on my skills for soccer were dumbed down. I felt hopeless. But I didn't give in, I keep my head in the game. Two years passed and and I didn't give an inch, now I am committed to University of St Katherines to play collegiate soccer, all because I didn't give up and let anything get to my head.

There are many challenges in our life. Being challenged is how we grow as humans. We make mistakes, but learn from them so that we do not repeat them again. Throughout life, challenges will stop you in your tracks. You must get past them in order to move on to the next level. Once you do, life will open up for you and give you endless possibilities. Then there is a challenge in your life that will either make you or break you. I believe that I have faced this great obstacle already. In my sophomore year of high school, I was trying out for the South High soccer team, I was expecting to make Junior Varsity, but my hopes and dreams were crushed. Then to make matters worse, I faced another great challenge soon after this one.

It was a bright and hot Wednesday. The sun was beating down on me like a fire burning down a forest. Tryouts for the soccer team were tomorrow, and I was ready to kill it. Or that is what I hope would happen. Wednesday was probably the longest day of my life. Tryouts were the only thing on my mind that day. The final bell rang and I went home, it felt like a normal day. Then soon came Thursday, the day of the tryouts. I don't know if it is like a sixth sense or something strange about me, but the day felt a little off. The sunlight hit me with different emotions. I felt like I was still trying to wake up from a dream, I felt stuck. In the locker room I was changing for soccer, and I realized that the whole time I was shaking. My hands were cold, and it was 80 degrees outside.

I left the locker room with doubts and questions to why I was feeling this way. I thought about it all the way to the field. Once I reached the field I stepped on to the turf, took a deep breath and told myself, “I got this”. The coach started the tryouts with some passing lines, and combination play. The ball reached me, and just like many the times before I brought my foot back to pass it back to one of my teammates. Then all of a sudden the ball jumped to the left and I missed the ball. I felt like an idiot. All my teammates yelled at me as I ran back to get the ball that I terribly missed. I felt like nothing was going my way, but I only made one mistake. All this nonsense was getting to my head, I let it get to my head. I was mad the rest of the tryouts because of one mistake. The passing lines and combination play ended, and we moved on to the 11v11 scrimmage. The game started and I got the ball right away. I decided to try and dribble to show off my skills and my control while on the ball. I dribbled past one, then two, and passed a good through ball to one of my teammates. I felt better, but not satisfied. I got the ball again and decided to take a shot on goal. I shanked it so horribly that I ended up fall over. As I sat on the turf, I watched as the ball flew away from the goal. I smashed my hand on the ground with anger. The rest of the tryouts I didn't receive the ball so there isn't much that I could have done.

The end of the tryouts finally came, and I felt like I did well. The coach started to name the off the people that would be part of the Junior Varsity team. The coach stopped talking and I didn't hear my name. At first I didn't believe it, but I then soon realized that I was not going to be a part of the team. I honestly felt like crying in side, but I had to keep it all in. The coaches said that if you didn't hear your name then you need to stay for the frosh soph tryouts. I didn't want to go at all, I would have much rather gone home and just quit. But I knew that if I did that my dad would be very disappointed in me. Lucky for me soccer is a passion and I knew that I wasn't really going to quit, even though I felt like that the rest of the tryouts. Unfortunately I had to stay if I still wanted to be on the frosh soph soccer team. At the end of those tryouts, they went off and called all the names that would be on the team, for some reason I didn't want to hear my name. I didn't want to hear my name being disrespected, as I felt that being on the frosh soph team was a sin. I heard my name called, I felt as my face crunched with anger, and my eyes wanted to let its wrath out. I had to hold it all in and go along with it. The day ended and I went home with so much frustration and disappointment with myself. I knew something wasn't right about that day and I let that get to my head.

Soccer season started and we started to have practices. I soon let all the anger and frustration go away, I realized that I still get to do what I love, and it shouldn't matter how or who I am with affect it. It was January, and my birthday was coming up. We were on Christmas break still. Another hobby that I like to do every so often is to go out in the desert and ride dirt bikes with my friends. My birthday was coming up and I asked my dad if we could go out to the desert. He said of course, so I started to ask any of my friends to see if they wanted to go.

The day came to go to the desert, and I was super excited. We ended up going with a friend and their family, they were going the same week that we wanted to go. It was all seeming to work out perfectly. I helped my dad get the R.V ready so we could go as soon as possible. We were eventually ready and we took off to the desert. We don't get to do this often so every time we did get to go, I got really hyper and excited. We got to the desert and met up with my friend and their family group. As soon as I got there, I got ready as fast as I could. I warmed up my bike and started to get my helmet and goggles on I slipped on my gloves and revved the engine. I got on the bike, pulled in the clutch, clicked it into first gear and took off, leaving all my worries behind. As I am tearing up the dirt, I find a trail that has a fence going parallel with it. I was intrigued by it and decided to ride near the fence. As I am racing along I hit a bump and get really close to the fence. Next thing I know I am on the ground with my bike laying next to me tangled in the fence. As I try to get up I feel a massive amount of pain in my left shoulder. I couldn't move or feel it, I touch my collar bone and I feel something sticking up. At first I thought that it was supposed to be there. But I soon realized what I had actually done. I was about a quarter of a mile from camp, I tried screaming but nobody heard me. I felt alone and hopeless. Then out of nowhere I am back at camp, sitting on a chair with everyone around me. I have two people attending to me and my dad packing everything up and getting the R.V ready to go. I was so confused on what was going on. Some parts and things came back to me but everything was still a bit foggy, all I remember was laying on the ground with my bike tangled in a fence, then all of a sudden being back at camp with everyone around me. After my dad packed everything and got the R.V started we started our way to a hospital. I was still out of it and everything went by in a fash. The next thing that I remember was being at the hospital and the doctor telling me that I am going to need surgery. I wasn't sure what for but then I realized that I was in a sling, and I also remember the something was wrong with my collarbone. I touched my collar bone and freaked out, I cringed super hard and couldn't believe what I had actually done to myself. Apparently I had snapped my collar bone in half. Like a snapped wooden pencil. After the surgery the doctor told me that I would not be able to play soccer for about 4 months. I was angry and wanted to leave.

Due to that punishment of breaking my collarbone I lost all the skills that I had gained up over the years. Because soccer is so important to me I started to kick the ball a day after my surgery. My mom wasn't exactly happy about that. After the brutal 4 months, I was allowed to finally practice soccer. I was so excited to start playing soccer again. But as the days went on my skills for soccer were dumbed down. I felt hopeless. But I didn't give in, I keep my head in the game. Two years passed and and I didn't give an inch, now I am committed to University of St Katherines to play collegiate soccer, all because I didn't give up and let anything get to my head.