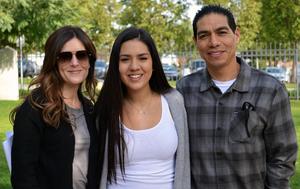 If there is one thing to take away from my speech let it be this: there will be times where things get challenging and it may seem like the end of the world but it is in those times you really find yourself and what you stand for. Those hard times also bring out the strongest versions of ourselves that are sometimes hidden deep down, when you discover that hidden warrior inside you, you can get through anything.

I spent my first year of high school at a different private school which I had attended
from kindergarten through 9th grade. Going to a small school has its upsides and downsides and I had the opportunity to experience both of those. From Kindergarten to ninth grade I had the same 30 classmates, we had grown so close over the years I considered some of them family. Seeing the same 30 people everyday also meant I never had the opportunity to get to know people outside of my friend group. Another downside was everyone's personal life was public knowledge to every single person in the school, this ranged from crushes and went as far as problems that were going on in people's family life. The greatest downside I experienced was I was stuck in a bubble that limited my view and understanding of the outside word. While there were downsides, there were some great experiences as well. For example, there was a sense of comfort and familiarity in seeing the same teachers and friends every day for ten years, this made it challenging to step out of my comfort zone and finally leave.
My freshman year of high school, was the first time I really experienced a change within my academic setting. I had finally moved to a different campus and was going to be surrounded by new faces and new personalities. My first months were exciting and challenging. During these few months, I began to notice things about the school that went against what i believed to be right and wrong. Sometime within this year I began to wonder if this school was truly the right fit for me and if I could see myself being there for four years. After many conversations with my family, we collectively decided this school, that I once considered my second home, was no longer where I was going to continue my education. This was an added stress to my family, who was also trying to figure out where my sister would be attending college the following year. I am so grateful they supported me and stood by my side despite the difficulties that came with seeing me leave a community that they also found to be family.
When it came time to tell my friends and teachers I was leaving, they criticized my decision, and some went as far as to say I would regret it and I was making the wrong choice. With all of the negative responses I had received, I began to doubt my decision and was almost positive I was making the wrong one. When it came time to start my first day here at RHP, I was beyond nervous. In the beginning, I was not at all confident in my decision to come here. Missing out on countless dances, football games and other events that I had watched my friends attend made me feel like I made the wrong decision. It was not until the end of my sophomore year where I began to get accustomed to RHP. I stepped out of my comfort zone and began to get to know my classmates and teachers. By the beginning of Junior year, I was completely sure that RHP was my new home away from home. In the short amount of time I had spent at RHP, I felt like I had made lifelong friends and memories that solidified my choice to leave my previous school.
Fast Forward to today, I have spent ample time reflecting on my years as a high school student. While continuously challenging me, RHP has given me the opportunity to expand my knowledge while having some fun in between. Being surrounded by various personalities, cultures, and religions has prepared me to enter college with an open mind and excitement for the next chapter in my life.
If there is one thing to take away from my speech let it be this: there will be times where things get challenging and it may seem like the end of the world but it is in those times you really find yourself and what you stand for. Those hard times also bring out the strongest versions of ourselves that are sometimes hidden deep down, when you discover that hidden warrior inside you, you can get through anything