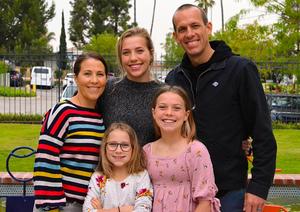 As I have genuinely tried to understand other’s stories,  I have come to see their worth and can more easily empathize with their situation. I encourage us all to take the time to understand people before we judge them, and you’ll be surprised with what you find.

So as I was preparing for my senior speech I think I faced a problem that only really lucky people have to face. Ive never really had a singular, earth shattering, devastating, defining event happen in my life yet. I haven’t had to overcome an illness or an immense challenge. However, as I thought back on my long life of 18 years, I realized I have a pretty unique story and I’ve learned many really valuable lessons, one of which I’d like to share with you.

So, Growing up, I was homeschooled. From preschool to my sophomore year, I did school in a much different way than everyone around me. I think a lot of people think they understand what homeschooling is, but let me tell you what it actually was like. Homeschooling was incredible. Yes, I spent a lot of time at home, but I grew up going to a community homeschool group that became my family. The interesting thing about these homeschool groups, were that everyone befriended each other. I learned from a very young age that someones age, race, fashion style, ability, or status did not define them. For instance, I grew up being best friends with the most punk kids you’ve ever seen . Fish net tights, chains and neon pink hair were normal to me. But I realized that those same kids who lots of people would look at and think were “rebellious”, actually loved fantasy novels, playing instruments, and really just wanted to climb trees and hang out with their friends. I learned that they had worth and we’re good people, despite their appearance. As I grew and went to other homeschool groups, I realized the same thing. I was close friends with kids ages 9-18, black, white, Hispanic, Jewish, atheist, scientologists, Christians, Democrats, Republicans, Abel bodied, and special needs. The closer I got to these people, the more I was able to look past our difference and really connect as friends.

I’ve learned that it’s really hard to dislike or hate people up close. In school, and in life, I think it’s really easy to dislike people if they are different. Not just when they look different, but when they think or act differently that we would want them to. It can make us uncomfortable or they offend us and it’s hard to see them as people with feelings and experiences just like you. So it’s easier to just say someone is annoying or stupid or just ignore them all together. However, you’re missing out. If you create a space where you can genuinely come to understand them, you will see that we are more alike than different. Let me tell you a story from my own experience to illustrate my point.

Hailey: two years ago in the summer time I went to this youth camp. I was a leader for these little girls who were around 12-13 years old. I had never met any of the girls in my group, and  all of the girls in my group were bright eyed and bushy tailed, accept for Hailey. Hailey was quiet, with long greasy hair covering the majority of her face. She wore dark clothes and was snappy with a cutting comment to any of the adults who crossed her path. accept for me. I don’t know why, but hailey liked me and would give me hugs and let me braid her hair. One of the days when I was watching my girls swim in the lake, Hailey’s weekly youth leaders came up to me and said “is Hailey giving you any trouble?”. I said “no of course not, she’s a sweetheart and she’s super kind to me”. The youth leader was shocked and proceeded to tell me how Hailey was one of the most difficult and mean girls she had ever met. She was rude and defiant and angry all of the time. She resisted the leaders, her parents, and the friendship of the other girls. She told me that Hailey had been having a rough time at home and needed someone who would love her. Now this is he good part. Later that evening, I pulled Hailey aside and asked if we could chat. As we cuddled on a couch, I asked her how she was doing and what was going on in her life. This 12 year old girl broke down in my arms and told me that she knew she was mean. She knew she was difficult. But she was just having a really hard time. Her parents were divorced, her grandpa had just passed away, and she didn’t have many friends. She was aching inside and I could see the light in her, even though she was struggling. We talked for hours and eventually Hailey had a smile on her tear stained face and we ended the night.

Now there are lots of hailey’s out there. People who act in ways that really aren’t okay, but underneath, they are just trying to deal with their pain. As I have genuinely tried to understand other’s stories,  I have come to see their worth and can more easily empathize with their situation. I encourage us all to take the time to understand people before we judge them, and you’ll be surprised with what you find.