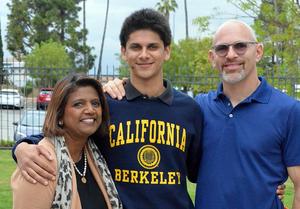 If you find yourself six thousand miles from Mexico on a tropical island called Saipan, spend a buck to have the worst taco of your whole life, just to become more appreciative of every other taco. If the view is better half a mile down the trail, hike that half mile, just to see the world from another perspective.  Life is about facing fears for the rewards that you may earn. To all of you proud and empowered Huskies in the room, I say go out. Face your fears. Experience the unknown. Create stories. Live life.

I miss the good, old, days.  Winter ended in February like it’s supposed to, Obama was president, a young Christopher Kent was up here most mornings on the mic, and every single speech started with “When I sat down to write my senior speech”.


When I sat down to resume my most eventful block of freshman science ever, I thought about what a silly story it would be, and how thrilled I’d be if the higher-ups would let me tell it for my senior speech.  I’ve gathered you all here because I have a funny story to tell. That  is why you’re here right now.


It all started when my teacher, who preceded Mr. Brammah and is no longer here, split us into four groups.  My group was set in the back corner of the classroom. It was the first block of the day, so my teacher thought it would be a good idea to shut the blinds and block out the light, to see how quickly we would fall asleep I guess.


I yawned, leaned back, and stretched out my arms to be met with a friendly surprise in the shelf.  It was Buzz! A friendly surprise indeed. I wrapped my fingers around Buzz Lightyear’s ribcage and helped him fly to my table in the back of the class where he kept me company for the rest of the lecture.  He was pretty large for a Buzz, probably ten inches tall, much larger than the actual one in the movie. The detail of his coloring entranced me.


Five to ten minutes later, my teacher looked up from the ground which he apparently was directing his lecture to.


I honestly didn’t.  Getting up off of my stool, I began an awkward and confused walk to the front of the classroom.  However, almost halfway to the front, I heard my teacher say “Bring Buzz”.


Of course.  I turned back, innocently helped Buzz fly to the front of the classroom, and was promptly asked to visit the front office.  He handed me the dreaded pink ticket. It was a real surprise. I told my teacher as best I could that I honestly didn’t think my actions were deserving of a trip to the office.  To solve this dilemma, my teacher asked the class if I was deserving of a trip to the office.


Chaos.  A couple minutes of it.  I really thought I had a chance of my penalty being rescinded.  Finally, my teacher said to me in a tone near desperation, “Henry, please just go to the office”. He added “...and don’t forget to bring Buzz”.


I was scared.  In middle school, I was in and out of the Director’s office and consistently earned Cs, Ds, and even the occasional F.  Now, in a new community of Huskies, I really wanted to have a clean fresh start.  It looked like my mission would fail. I felt doomed to a life as a campus criminal.  I felt I would always be the kid that when my parents had meetings with my teachers, they would say, “Your son is a good student, however....”


Honoring the teacher’s authority as all students should, I left the classroom.  I really didn’t want to be seen carrying a Buzz Lightyear figurine from the back to the front of campus, so I took off my hoodie and wrapped it around Buzz for his longest flight yet. It was cold anyway.  I figured he could use the extra layer.


I got to the front of the campus and found a young Mr. Maher and Mrs. Morris having a conversation at one of the round tables next to the fountain.  Once I got Mr. Maher’s attention, I sat down at the table next to him, revealed the Buzz Lightyear figurine, and said, “Mr. Maher, I have a funny story to tell you…”

I told him the story I just told all of you, explaining why I found myself presenting a Buzz Lightyear figurine to Director of my high school.  Already on edge, Mr. Maher’s response made my heart skip a beat. “So what do you think your consequence should be?”


I played it cool.  “Mr. Maher, I think that based off of what I have just explained to you, I feel that my action of picking up Buzz Lightyear had little to no negative effect on the classroom, and I don’t think I deserve any punishment.”


I walked free that morning.


The moral of the story is about facing fears.  A lot of the fears we feel are imposed on us by society for the benefit of the few in power.  Feeling those fears does not benefit us. Facing them and conquering them is often positively life-changing.  Facing my fear, I learned that adults with authority status can be people too. If you find yourself in China with some friends on a service learning trip, share a pan-fried squid on a stick doused in chili peppers, and maybe try chicken feet while you’re at it.  If you find yourself six thousand miles from Mexico on a tropical island called Saipan, spend a buck to have the worst taco of your whole life, just to become more appreciative of every other taco. If the view is better half a mile down the trail, hike that half mile, just to see the world from another perspective.  Life is about facing fears for the rewards that you may earn. To all of you proud and empowered Huskies in the room, I say go out. Face your fears. Experience the unknown. Create stories. Live life.