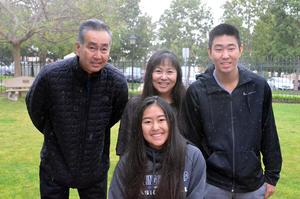 Breathing is a sign of life. On April 20, 2001, I took my first breath and I cried. On June 23, 2014, my breathing stopped for a few minutes and I went straight to the ventilator. In the summer of 2014, I practiced breathing on my own again. In 2015, my breath stuttered, and it began to grow stronger and stronger.

Somewhere between 2015 and 2017, I learned to stop and catch my breath. People always seem to be chasing and chasing after their goals. People seem to always be chasing full speed after something. So, we do what we can to keep up: we chase. There’s nothing wrong with that. Absolutely nothing wrong with having ambition and drive, nothing wrong with having a goal and the mindset to accomplish it. What’s wrong is that sometimes, we end up lost in someone else’s goals for us. What’s wrong is that sometimes, we end up tired of whatever it is that we’re chasing, but we keep going because it’s expected of us. Somewhere between 2015 and 2017, I chased after something I didn’t really want, something that wasn’t my own. So, I stopped and caught my breath. And then, I chased after something that was a little like my own, something a little closer to what I wanted.

Somewhere between 2016 and 2018, I learned to slow down and breathe life. Even if I was chasing something closer to what I wanted, it’s not exactly what I wanted. I slowed down, my hand dragged just slightly, and the vague image of this goal blurred. A normal rhythm set into each push because often, we chase without knowing the reason. Often, we chase without knowing the destination. Somewhere between 2016 and 2018, I’ve learned that without knowing a reason, without knowing the destination, don’t speed life up if there’s no reason to. Slow down, take it day by day, and experience the joys and pains. For now, just soaking in experiences from the present, learning to think less about the future, and carrying the lessons of the past is enough.

Somewhere between 2018 and 2019, I learned that breathing can be difficult or easy. Some days, breathing is difficult; it’s a struggle, a burden. Other days, breathing is easy; it’s a gift, a blessing. It’s okay to have both kinds of days. And it’s easy to be kind to myself on good days when breathing is easy. But when I have bad days and breathing is difficult, it’s okay, I should still be kind to myself.  Somewhere between 2018 and 2019, I learned that if I have easy breaths for a week and difficult breaths for a day, it really is okay; I’ll take what’s dealt. Because I’ll make mistakes, I’ll fail expectations, I’ll miss opportunities, but as long as I learn and grow from them, that’s enough for me.

In and out, deep and slow. That’s the way I learned to breathe again.