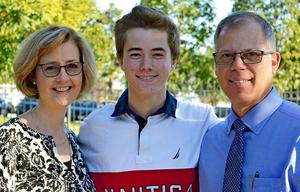 Coming to Renaissance undoubtedly changed me for the better. I learned that most people want to be friends, and if you find enough common interests with someone in a similar situation, it can be extraordinarily easy to make friends. After coming to ren, I’ve learned I should try to be more friendly and open to my peers.

Going into new environments and circumstances has always been a difficult thing for me. No matter what the circumstance is, if something’s different than what I’m used to, it will get to me. However this is only if it’s something long term that I’ll have to keep going back to, which I find interesting. If someone I knew came up to me and said we were leaving in an hour to fly to a new country for a few days before coming right back, I probably wouldn’t object. When I came to Renaissance, however, it was a different story.

I’ve always been a pretty shy kind of guy. However, sweating bullets all the time has led to some strong personality traits. It has led me to care a lot about my sense of humor. Comedy doesn’t care who you are or how you’re doing, it’s just there to make you laugh. In daily conversation I care much more about whether topics are funny, rather than being serious and having good points. Sure serious topics should be discussed sometimes, but maybe once or twice a month at most. I’m also very quiet, if you haven't noticed. I enjoy being quiet. I can’t count how many embarrassing situations I’ve avoided by being quiet. Sure it can be a downside, and it takes more effort to get myself to talk when I do, but because of this, I only speak when I have something worthwhile to say. I find it funny how people interpret this. Often times people figure I have excellent ideas all the time, and try to get me to express them more. However, what’s really happening is that I only share thoughts if they come to me, and if I decide they’re good. But I’m fine with people assuming the first option.

The first day I came to Renaissance was dreadful. I started the day off by waking up earlier than I had in the last several months. I immediately ran to the bathroom feeling nauseous, anxious about the day to come. I forced down my breakfast, and my mom drove me to school. When we got there, I was petrified. I stayed as far away from everyone as I could, afraid I would do something dumb and make people think I was “weird.” I didn’t talk to any of my classmates and stuck to the teacher like glue. This continued on for several weeks. I gradually got a feel for the students in my class, and began to feel a little more comfortable around them, but I still didn’t become friendly with anyone. After about a month passed, I decided I wanted to leave the school, since I wasn’t making any new friendships. My parents weren’t going to switch me in the middle of the year, but they said I could decide whether or not to come back the next year. Obviously, the best course of action was to not make any friends for the rest of the year. I guess my logic was that I wouldn’t miss anyone when I changed schools.

I finally made a friend around two months into the school year. We had just got out of science class, where we had watched a video about how closely time is intertwined with the universe. Topics like this have always been incredibly interesting to me, and as I found out that day, a classmate named Cole found it equally interesting. The whole sixth grade class stayed together throughout the day, and we were walking down to lower campus for Art. Cole and I talked in depth about the video for the whole walk. We discovered we had a similar level of understanding of it, which was probably very low, and our friendship grew from there. Having a friend, we both branched out to more and more people until we were friends with every sixth grader in Renaissance and many of the kids in RHP.

Coming to Renaissance undoubtedly changed me for the better. I learned that most people want to be friends, and if you find enough common interests with someone in a similar situation, it can be extraordinarily easy to make friends. After coming to ren, I’ve learned I should try to be more friendly and open to my peers. After assimilating myself into Renaissance I was actually happy to be at school, which I previously had not realized was a thing.