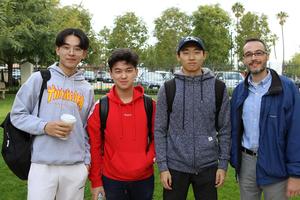 However, I have realized that knowing oneself is an important step in identifying and achieving your goals. If you don’t know who you are, you can’t know what you want to do with your life. As Socrates said, “The unexamined life is not worth living.”

I’m not a person who talks a lot about myself. However, I was not a quiet kid when I was young. I don't remember when I started to change. However, I think it started when one day, my dad and I were talking about life and he suggested that I should think before I speak, and I agreed with that because I didn’t want to kick the wall in frustration at night for saying stupid things to my friends or about my friends. After that conversation, I really started to think before I spoke. It was not easy to change my talking habits at the beginning. When I got used to thinking before speaking, I became more patient and thoughtful, but the result was that my speaking frequency has decreased. When I got into middle school, I slowly realized that sometimes listening to what other people were saying was more important than giving advice or suggestions. When I realized that, I became a better listener. My friends started to talk about their thoughts or worries with me.

Being a better listener is good thing. However, it also had a negative effect on me. I became a better listener, but at the same time I became a person who didn’t really express myself much. My dreams were always the same, which were that I would someday be doing whatever I wanted to do. However, the problem was this- there was nothing I wanted to do. I always wanted to find a new interest or purpose. I started to think about this  since middle school, but I couldn’t find it. I just didn’t really know much about myself. Having more time for listening reduced the time that I was speaking out, and because of not sharing my ideas, I didn't have to think a lot about what motivated me or gave me purpose.

What I mean by finding something I like is not a simple answer like “I love playing sports” or “ I love football.” I suppose what I mean is I am still trying to find my purpose and passion. I’ve made progress but I am still thinking about this. However, I have realized that knowing oneself is an important step in identifying and achieving your goals. If you don’t know who you are, you can’t know what you want to do with your life. As Socrates said, “The unexamined life is not worth living.”